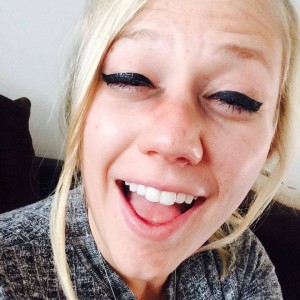 That one time when Taylor broke her nose. 🙂

Choosing who to recognize this month was a total no brainer. As of late, Taylor has been our resident poster child for adaptability and perseverance.

A while ago, she mentioned pain in her shin. Thinking it was a soft tissue problem, we went at it as we normally would. The pain nagged for a while though and she finally got it checked out. Turns it she had a slight fracture on her fibula! Doc told her no CrossFit for at least 6 weeks.

Total bummer, but we took it as an opportunity to focus on weaknesses. For Taylor, it’s historically been upper body strength and stability. We were super limited on things she could do as we needed to limit load on her leg. This led to the adoption of a rather tedious and monotonous workout routine focusing on core stability as well as upper body pressing and pulling of the bro sesh variety.

Taylor doesn’t complain though, not outwardly at least. She comes in faithfully and works on her stuff on her own. Persistence despite the monotony has yielded slow and steady results that will take her far when she’s given the green light to jump (literally) back into the regular routine.

It’s been really awesome seeing Taylor’s dedication and consistency during this time. She’s getting stronger and as always, it’s just fun to have her around.

Please join me in recognizing and honoring CrossFit Stronghold’s April 2016 Athlete of the Month: Taylor Sedensky